No products in the cart.

Why consider Playing a Stringed Instrument

What are stringed instruments you ask?

In musicology, string instruments are known as chordophones. One of the five main divisions of instruments in the Hornbostel-Sachs scheme of musical instrument classification. A stringed instrument is any musical instrument that produces sound through the vibration of stretched strings, which can be made of vegetable fibre, metal, animal gut, silk, or artificial materials such as plastic or nylon.

The most common string instruments in the string family are guitar, electric bass, violin, viola, cello, double bass, banjo, mandolin, ukulele, and harp. But there are plenty of strange and unusual stringed instruments too, our favorite has to be the Hurdy gurdy!

Interestingly enough pianos are often considered stringed instruments too, although you would be forgiven for not knowing this as their strings are, in most cases, hidden inside. A grand piano with its lid open, displays the stringed mechanism inside. Pianos are unique in that they combine elements of keyed instruments, drum or percussion instruments and the string instrument all in one- you press the keys which result in a small hammer beating a string to produce a vibration and then sound.

Guitars are probably the most popular “stringed instruments” these days, however they fall into their own category. As mentioned above, traditionally they were never played in an orchestra as they were not loud enough (before the invention of amplifiers). Historically guitars and lutes would have been played in smaller more intimate spaces or as accompaniment to minstrels.  The Concerto in D Major by Antonio Vivaldi was created in the 1730s it was written for Lute, but arranged for guitar and was one of the first recorded instances of guitars being used in the orchestra. With modern amplification techniques, the guitars’ popularity is increasing and perhaps guitars will be included in the orchestra string section more often. That being said, when we talk about string instruments we are most often referring to the classical orchestral instruments like the violin, cello etc.

String instruments have been around for a long time. Dating all the way back to around 13,000 BC, where cave painting in the Trois Frères cave in France shows what some believe is a musical bow. From the musical bow (prehistorically a hunting bow that was plucked to produce a twanging sound) a long line of stringed instruments developed. Adding multiple strings added new notes, thus creating new instruments. Other adaptions along the way led to the ability to produce chords and many of our modern stringed instruments came from these earliest beginnings.

Stringed instruments can be played in a number of ways, however most commonly they are played by passing a bow over the strings or by plucking them with fingers or a plectrum. Bowed instruments encompass the string section instruments of the orchestra in Western classical music (violin, viola, cello and double bass) All of the bowed string instruments can also be plucked with the fingers, a technique called “pizzicato”.

Why should you consider playing a string instrument and which one would you choose?

The technique of drawing the bow across the strings teaches the learner different tones and timbres, and the musician is able to distinguish small changes in sounds. Posture and muscle strength are developed when holding and playing any string instrument.

If you are an anxious person however, you may want to consider playing as a hobby rather than a career as playing in a professional orchestra can be stressful. As with any job where you require both mental and physical strength, it may not be for everyone! That being said, the benefits of learning an instrument in your own time outweigh the cons and the camaraderie of playing as part of a band or school orchestra can, for many students, be a vital and exciting part of their education and formative years. Don’t forget that many folk bands or small orchestras also use string instruments and not all string instruments need to be played in a classical context. 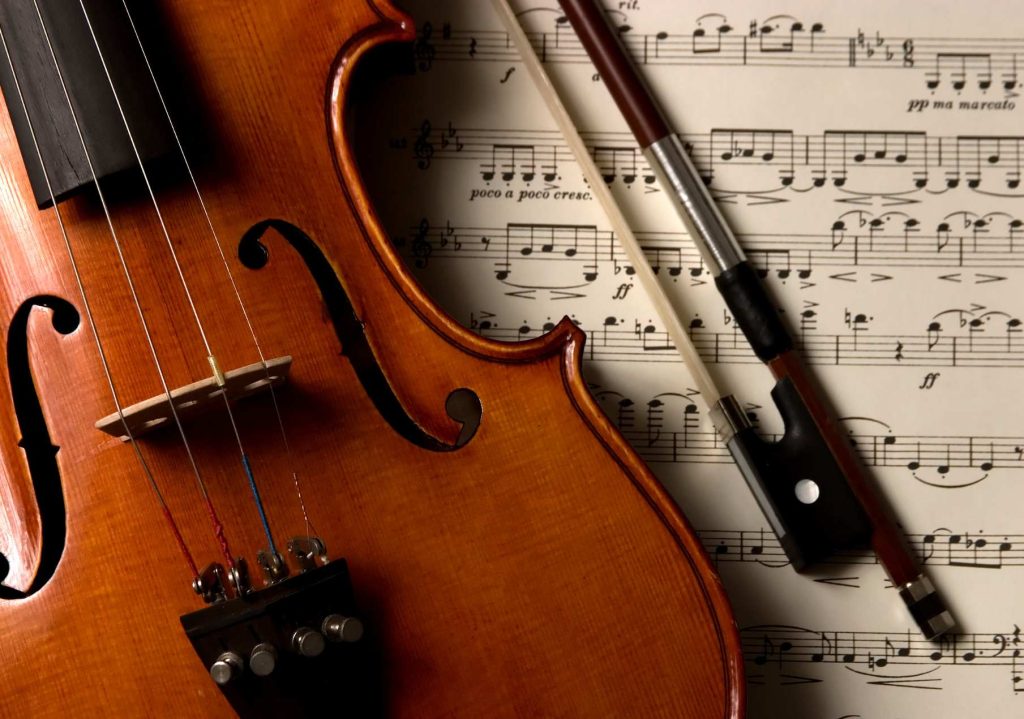 Which string instrument is for you?

Violin is considered THE principal orchestral instrument, the voice of the ensemble, and also the most noble of the classical instruments. It’s harmonies and sound carry the orchestra, and is said to inspire the audience with its emotionally flexible range. So if you like the idea of playing an instrument that can put you at the forefront of classical musical superstardom, the violin maybe the stringed instrument for you. The violin is versatile however, and is not only played in classical or jazz music. It is also sometimes called a fiddle and is a popular instrument in country, folk music, and bluegrass.

Viola are similar instruments but some would consider them more difficult to play than violins as they are larger and heavier. They make a more mellow sound in comparison to a violin and are often the supporting instrument in chamber music. The Viola is not as popular as it’s smaller sister, however this can be an advantage for the Viola player, who becomes through his or her rarity a highly sought after musician.

Cellos are larger still, played sitting down. They produce a rich tone and their sound is often likened to the human voice. They are both challenging and satisfying to play, with a vast array of classical compositions arranged just for them. These days Cellos are used in popular music too, adding their magic to bands like The Beatles, The Lumineers and even Nirvana to name a few.

The Double Bass is one of the largest string instruments, along with the harp and can be found in classical ensembles as well as jazz bands. It has the lowest pitched sound, and most often makes up the backbone of the band, providing the rhythms and beats. Double bass are played with a bow or by plucking.

It can be tough to decide which stringed instrument to play. Luckily if you learn to play one, you most likely will be able to add others to your repertoire. Both the violin and viola are similar, and the cello and viola are tuned in the same way. Both Cello and Double bass are played upright.  Learning any of the stringed instruments gives you a leg up when applying for a job or school, as it helps build valuable teamwork skills. It’s also advantageous to learn a string instrument as it may provide unique job opportunities from playing at events or even on cruise liners.

Contact Shine Instrument Rental and ask our team about our stringed instruments.